Barbara McCormack is Special Collections Librarian at Maynooth University. She teaches on the MA Historical Archives, a programme concerned with the principles, attitudes and skills necessary for the professional management of archival collections.

As Special Collections Librarian at Maynooth University Library I am in the enviable position of curating the historical collections of St Patrick’s College, Maynooth held in the Russell Library, a Pugin designed reading room completed in 1861. One of the most important collections in this regard is a collection of sixteen medieval manuscripts dating from the eleventh century to the first quarter of the sixteenth century which. Angela and Peter Lucas extensively catalogued for their book The Medieval manuscripts at Maynooth: explorations in the unknown. Published in 2014 this work presents comprehensive palaeographic and codicological details for each manuscript along with provenance and other information.[1] Many of the manuscripts are liturgical in nature, reflecting the fact that St. Patrick’s College was founded in 1795 as the national Catholic seminary of Ireland by a parliamentary act ‘for establishing a college for the better education of persons professing the popish or Roman Catholic religion, and intended for the clerical ministry thereof”. [2] It is likely that senior members of the college staff acquired most of the manuscript collection, which contains breviaries, books of hours and psalters, in the nineteenth century.[3]

When Dr Mary Boyle from the Department of German Studies at Maynooth University contacted me about arranging a manuscript session for a group of students in the Russell Library I was delighted to be involved. In Special Collections & Archives at MU Library we work, internally with colleagues in the Library’s Teaching and Research Development section, and externally with various departments across the university, to actively embed our unique and distinctive collections into the curriculum, with a view to harnessing their potential. Delivering tailored sessions to individuals and groups in the Russell Library or the Special Collections Reading Room in the John Paul II Library is a key strategic aim in this regard. I co-deliver a module on the MA Historical Archives at Maynooth University with my colleague Hugh Murphy, Head of Collections and Content, in which I introduce students to the areas of book history, the medieval manuscript tradition and the history of print. I am also involved in delivering a module with the Centre for Irish Cultural Heritage relating to cultural heritage and the Irish literary tradition and am an occasional lecturer with the School of Information and Communication Studies at University College Dublin.

My approach to teaching students about medieval manuscripts is a combination of theory and practice – I generally introduce key concepts relating to the manuscript tradition in a classroom environment and then invite students to engage with the texts in a supervised setting where they gain ‘hands on’ experience in manuscript handling and preservation practices. I give students an overview of the history of the book from ancient times to the late medieval era, the practical tools employed in the production of manuscripts and the raw materials involved, and I introduce manuscript terminology to help with analysis and description.

At Maynooth, we are very lucky to hold a collection of Mesopotamian cuneiform tablets dating mainly from about 2,000 BC, which I use to show the progression of texts from clay tablets to the codex as we know it today. After briefly discussing other writing surfaces like wax tablets and papyrus I tend to concentrate on vellum and parchment production, explaining the difference between vellum (calfskin) and parchment (the split skin of an older animal). I find it particularly useful to show students some scraps of vellum so that they can identify the smooth ‘flesh’ side and the ‘hair’ or ‘dorse’ side, as well as examples of damage to the membrane, which occurred during the life of the animal or during the preparation of the skin. I also discuss the production of ‘laid’ paper as a writing surface in the later medieval period, explaining characteristics such as chain lines and watermarks caused during the process of dipping wire moulds into a substance of pulped linen rags (hover over image for caption; click for full information). 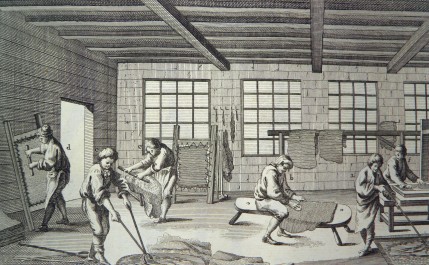 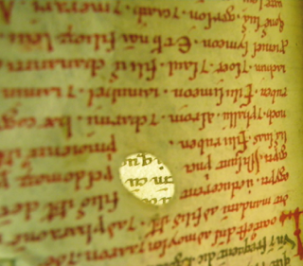 Example of damage to membrane.
In order to understand (and appreciate!) the complexities involved in manuscript production I explain the process of folding and gathering the prepared skins into quires. I also show examples of ‘pricking’, a method to draw straight horizontal lines across the folio for writing purposes. Lines were ruled in dry point by making an impression in the membrane or paper, by lead point or by ink, the latter usually contributing to the overall decoration of the text. I briefly explain the types of ink found in medieval manuscripts (this is mainly iron-gall ink, which is vegetable based and can fade over time). The script employed by the scribe is important because it can determine when and where the manuscript was produced.

Decoration is an important aspect of medieval manuscript production and it helps to capture the imagination of students. Thankfully, we have plenty of rich examples of decoration and illumination in our manuscripts. I explain the process of rubrication (the addition of red ink), decorated initial letters, and pen flourishing and give examples of decorated and undecorated catchwords (used for collation purposes).

I explain to students that medieval manuscripts were sometimes used to reinforce the bindings of printed books from the fifteenth century onwards. We have a nice example in the Russell Library – RB 8a is a fifteenth-century printed book with boards covered in a plainchant manuscript (hover over image for caption; click for full information).

Binder’s waste reinforcing the spine of Augustinus’ ‘Opuscula’, which was printed in Strasbourg in 1489.

RB 8a is an example of a medieval manuscript used to bind a printed book.

During the hands-on session, students view a sample of liturgical and other manuscripts in the collection. RB 37, a Book of Hours produced in Paris in the late fifteenth-century, is a particularly nice example. The text contains a miniature of Saint Genevieve, the patron saint of Paris, opposite a miniature of King David playing his harp. Other miniatures include those of Saint John the Evangelist writing the Book of Revelations on the island of Patmos, Saint Michael the Archangel defeating Satan, and Saint Lawrence holding a gridiron. A presentation miniature depicting the owner of the manuscript kneeling before Saint Anne and the Virgin Mary is also a nice addition.

Finally, I think it is important to discuss provenance with students so that they have an idea of the history of the book. I explain how inscriptions, bookplates, shelf-marks and even pressed flowers can contribute to our understanding of the book as an artefact.

By teaching students about the history of the codex, we encourage them to engage and interact with unique and distinctive collections at Maynooth University Library and elsewhere.

[1] Angela and Peter Lucas, The Medieval manuscripts at Maynooth: explorations in the unknown (Dublin, 2014).

[3] Angela and Peter Lucas, The Medieval manuscripts at Maynooth.