Teaching the Codex is run by Tristan Franklinos and Mary Boyle. Tristan came to palaeography through Classics, and Mary through medieval English. They began to compare approaches during their Master’s degrees at Merton College, Oxford, and discussions with fellow postgraduates made clear the variety of teaching methodologies out there. These discussions led, ultimately, to Teaching the Codex. The Teaching the Codex committee members are Alex Peplow and Jessica Rahardjo.

Mary is currently a Leverhulme Early Career Fellow at the University of Oxford, looking at nineteenth-century cross-cultural Anglo-German medievalism. Before moving to Oxford, she was an Irish Research Council Postdoctoral Research Fellowship at Maynooth University. In 2017, she was a Visiting Scholar at the Centre for British Studies/ Großbritannien-Zentrum at the Humboldt University in Berlin, and a lecturer in German at Oriel College, Oxford. She completed an AHRC-funded doctorate at Merton College, Oxford in 2016, researching late medieval accounts of pilgrimage from England and Germany to Jerusalem. She is interested in the comparative literary study of Germany and England throughout the Middle Ages, and into the early modern period, and particularly in religious writing. Mary has also worked on English vernacular manuscripts and German and English early printed books. Her current research interests are in  nineteenth-century cross-cultural (Anglo-German) medievalism.

Tristan is a British Academy Postdoctoral Fellow in Classics and Junior Research Fellow at Trinity College, Oxford; he also teaches for Oriel College, Oxford. He is currently working on a new critical edition of, and literary commentary on, [Vergil]’s Catalepton. In his doctoral thesis, he explores the ways in which the Latin elegist Propertius engages with and recasts his own poetic material, as well as that of his peers and predecessors. More broadly, he is interested in the literature of the first century B.C. (esp. the poets and Vitruvius); medieval Latin literature; the place of the author and the reader in relation to a text; and in textual criticism, palaeography, and the history of the book. You can follow him on Twitter here. Click here for his faculty page.

Alex is a DPhil student in the History Faculty, University of Oxford. He is working on a thesis entitled ‘Political Ecclesiology: Ockham, Ludwig IV, and Anti-Papal Imperialism’. He is also interested in the spread of non-German literature within the Empire. You can follow him on Twitter here. 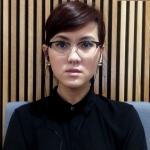 Jessica is a DPhil student in the History Faculty, University of Oxford. Her current research is on early Islamic funerary material culture in Southeast Asia. She is also interested in Arabic and Southeast Asian manuscript cultures. She has been a member of the committee since 2016, when she was completing her MPhil in Islamic Art and Archaeology at Oxford. Click here for her academia.edu page, or follow her on Twitter here.