Hope Doherty explains what the trimming in CUL MS Dd.10.44 can tell us about the way it was put together as a codex. Hope is in the first year of a PhD in Medieval English Literature at Durham University, focusing her research on the interaction between theology and mental illness in Marian writing. She completed her BA and MPhil at St Catharine’s College, Cambridge. Follow her manuscript posts on Twitter @EHopeDoherty.

Cambridge University Library MS. Dd.10.44 is a parchment manuscript dating from the early to late fifteenth century. The manuscript appears to have been compiled in two parts, which makes it a valuable teaching resource, as there are several features that point to its compilation in two parts some decades apart in the fifteenth century. The first part of the MS is a Middle English translation of a twelfth-century Salernitan medical text, the Practica brevis, in sixty-eight chapters. The second half, its presentation in keeping with that of the Practica with its red headings, is comprised of excerpts from various medical texts, and collections of medical receipts. One of the most obvious signs that this MS has been created in two parts is that the leaves of the first part of the MS have been trimmed to fit with the second half; luckily, the manuscript appears to have quire numerals (with modern pencil numbering), some of which have been lost in the first half of the MS. For example:

Here, quire 4 (signified by the Arabic numeral, such as is also used in the chapter numerals of the Practica brevis) has been trimmed; the numeral has lost part of its shape. Another example is quire 7 (again signified by the Arabic numeral) which has narrowly escaped trimming, but is positioned very close to the edge of the leaf, suggesting it predates the trimming:

Some quire numerals have been completely trimmed away, such as in the case of quire 6, leaving only the modern pencilling: 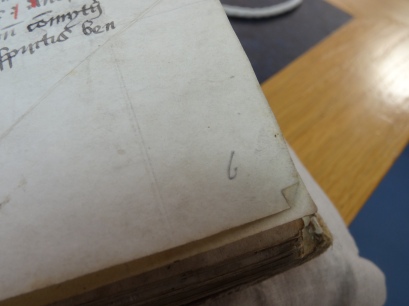 In contrast, the quire numerals from the second half of the manuscript are all intact, and are written well away from the edges of the leaves, suggesting these were not trimmed like the leaves in the part containing the Practica were. We can also tell that these quire numerals are contemporaneous with the script because they use the Arabic numerals for the numbers 4, 5 and 7, just as the chapters in the Practica do. For example, quire 14:

A useful way of keeping track of these quire numerals and how they change across the manuscript is to make a table, like so:

Organising the information in the manuscript in this way—and the process of acquiring it—can tell us a lot about how the manuscript was put together. The quire numerals are written on the recto side of the last leaf of the preceding quire. In the part of the manuscript containing the Practica, a pattern of red and black ink has been used for the numerals (though because of the trimming, it is difficult to determine what precisely this pattern is or what it signifies). In the second part of the manuscript, only black ink has been used for the quire numerals, again suggesting they were written at a different time to those occurring in the first part. We can suggest from this evidence that the manuscript was bound together at the time that the second portion was made, the Practica being trimmed to fit with it, and the quire numerals continued in the second portion with a knowledge of where the trimming would occur. (The modern numerals are missing on f. 1r and f. 114r, which is likely to be because the extant numerals are very clear and pencilled additions were deemed unnecessary.)

The quire numerals present concrete evidence that the manuscript was compiled in two separate parts and that the second of these was written at a later date; there are other signs too. For me, the trimmed quire numerals were the first sign I noticed which then led on to others. For example, the collation seems different across the manuscript: the second series of quires appears thicker than the first, and its quires are joined with a red waxy substance.

CUL MS Dd.10.44. This image is taken from the end of the MS, so the ‘waxy’ quires appear above the earlier ones. Reproduced by kind permission of the Syndics of Cambridge University Library.

After I noticed these, I paid more attention to the handwriting. Using the examples given in M. B. Parkes’s English Cursive Book Hands, 1200-1500, I identified the Practica brevis as being written in a mixed hand, with both Anglicana and Secretary features, possibly a university bookhand. I judged it to be of the early fifteenth-century due to a preponderance of Anglicana letter-forms in comparison to later university scripts.[1] The second part of the manuscript is again written in a university hand, but is better characterised as Secretary with Anglicana features, and is probably later than the first script, due to the abundance of Secretary features, such as increased breaking of pen-strokes between letters, and a replacing of the Anglicana long ‘r’ with the Secretary two-shaped ‘r’. We can compare these scripts side-by-side:

A third scribe has written three medical receipts beneath the ending of the Practica text; these are also in a later hand with more Secretary features:

Lots of medical books would have blank pages where additional recipes could be written,[2] but this manuscript has only these few leaves at the end of the text of the Practica—those left over in the last quire. This also suggests the manuscript was compiled in two parts, as it is only these transitional leaves which have been left blank (though it is not possible to say if the hand here predates the hand of the second part of the manuscript following it). Something that can be dated is the inscription of William Thorowgood, written on f. 102v., recording the birth of his daughter An in 1561:

William Thorowgood’s inscription also occurs on the last leaf before the back cover, beneath the elaborate name of John Tyghte: